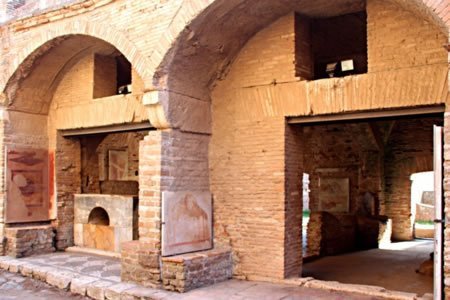 Antiquity and fast food: the thermopolium of Via Diana in Ostia Antica

If you believe that finger food, fast food restaurants, bistros and pubs are a prerogative of the modern era, then take a ride in the extraordinary archaeological area of Ostia – the harbor city of ancient Rome, which, during 2nd century AD, at the time of its greatest expansion, could count on a population of about 50,000 inhabitants – to personally find out that we have not invented anything. Along the via Diana, on the ground floor of the insula bearing the same name, an ancient thermopolium (literally ‘a place where something hot is sold’) of Hadrianic times (III century AD) still open its ancient doors. Surely one of the most evocative buildings in the city, this cook-shop displays three entrances leading into as many rooms. The main environment of the thermopolium, the central one, is equipped with a three-storey counter, where the most hurried customers consumed food and drinks standing up by; the lowest shelf hosted a sink to wash the dishes. the lowest shelf hosted a sink to wash the dishes. A second counter displayed the cooked meals to the patrons. The fairly large room is further decorated with frescoes that had the dual function of embellishing the otherwise rather bare walls, and presenting the ‘house specialties’ to the clientele. The right compartment was occupied by the kitchen, equipped with stoves and “dolia” – terracotta containers of spherical shape, designed to keep water and wine cool. Still uncertain, however, is the intended use of the room on the left. The back of the ancient ‘pub’ is occupied by a courtyard with masonry seats for guests who wish to have a meal outdoors. What could you taste in a restaurant of this type? First of all, the wine, consumed at all meals, but above all at dinner, often watered down (vinum mixtum) and sweetened with honey (mulsum). Among the dishes served – all very simple – the “puls” – a kind of spelled flour porridge cooked in salty water – stood out for centuries as the national Roman dish. It was accompanied by peas, beans, onions, cucumbers, eggs, cheese, seasonal fruit, bread and, for the most wealthy, desserts and other baked buns.