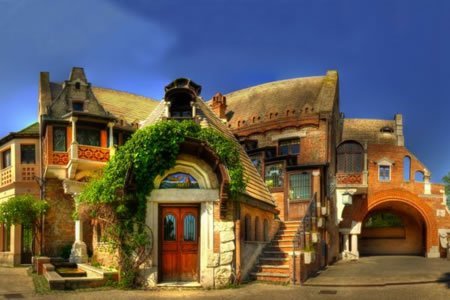 Between fairy tale and reality: The Owls’ Cottage in Villa Torlonia.

Prince Giovanni Torlonia Jr. was the scion of two of the most illustrious Italian families: the Borgheses, on his father’s side, and the Torlonias of the maternal branch. Born in Rome in 1873, founder of the Bank of Fucino, proponent of the recovery of the port of Trajan, and senator of the Kingdom of Italy in 1920, granted to Benito Mussolini, as an official residence, the beautiful Villa Torlonia on Via Nomentana. For himself, he kept only a dépendance in the park, the so-called Swiss Hut, but had it completely restored, ideally dedicating it to the owl, a nocturnal bird symbol of wisdom (it was one of the attributes of the goddess Athena) and clairvoyance. Under a stylistic point of view, the Owls’ Cottage is an architectural caprice, a bizarre cross of heterogeneous elements, seemingly assembled by a leprechaun. The small nocturnal bird is obsessively repeated on the stuccos, furniture, panelling, wallpapers, as well as on the magnificent series of colorful stained glass windows, made between 1908 and 1930 by master glassmaker Cesare Picchiarini on the design of two of the most famous exponents of Roman Art Noveau: Paolo Paschetto and Duilio Cambellotti. After a very long period of abandonment and ruin, thanks to a courageous and meticulous restoration, in 1997 the Owls’ Cottage was returned to the admiring glances of visitors.